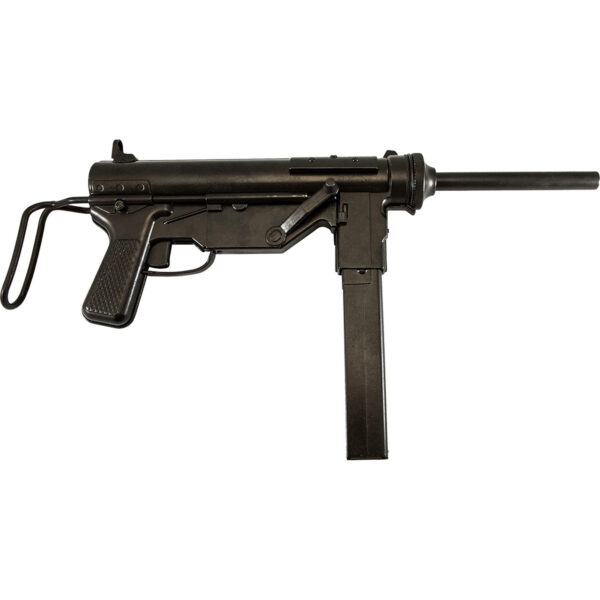 The M3 was an automatic submachine gun designed in 1941 by George Hyde, an experienced gunsmith in the German army during the First World War and who in 1927 emigrated to the USA. The weapon was commissioned by the USA Army because of the effectiveness of the European submachine guns such as the German MP, or the British Sten, and also because of the production and cost problems of the Thompson M1928A1.

The aim of the M3 sub-machine gun was just the simplicity: it was activated by retraction of masses with an open bolt and firing bursts that were fed by a straight magazine with double row of ammunition with a capacity of 30 cartridges 45 ACP (11.4 mm). it was a completely metallic weapon that had a telescopic stock and an ejection window for the removal of the fired cartridges, which in turn acted as a safe against possible falls or blows that accidentally fired the weapon.

Please note: All Denix Replica items ship from a separate location. By purchasing a Denix Replica Firearm, you agree and understand some Denix Replica Firearm orders are currently on backorder and shipment may take up to and may exceed 30 days. Customers will receive one package containing the replica firearm.  An additional package, containing a complimentary item on orders over $100 will be shipped from WorldWarSupply®.  Shipping notifications will also be sent from WorldWarSupply®.

Because of the nature of this item, it is NON-RETURNABLE