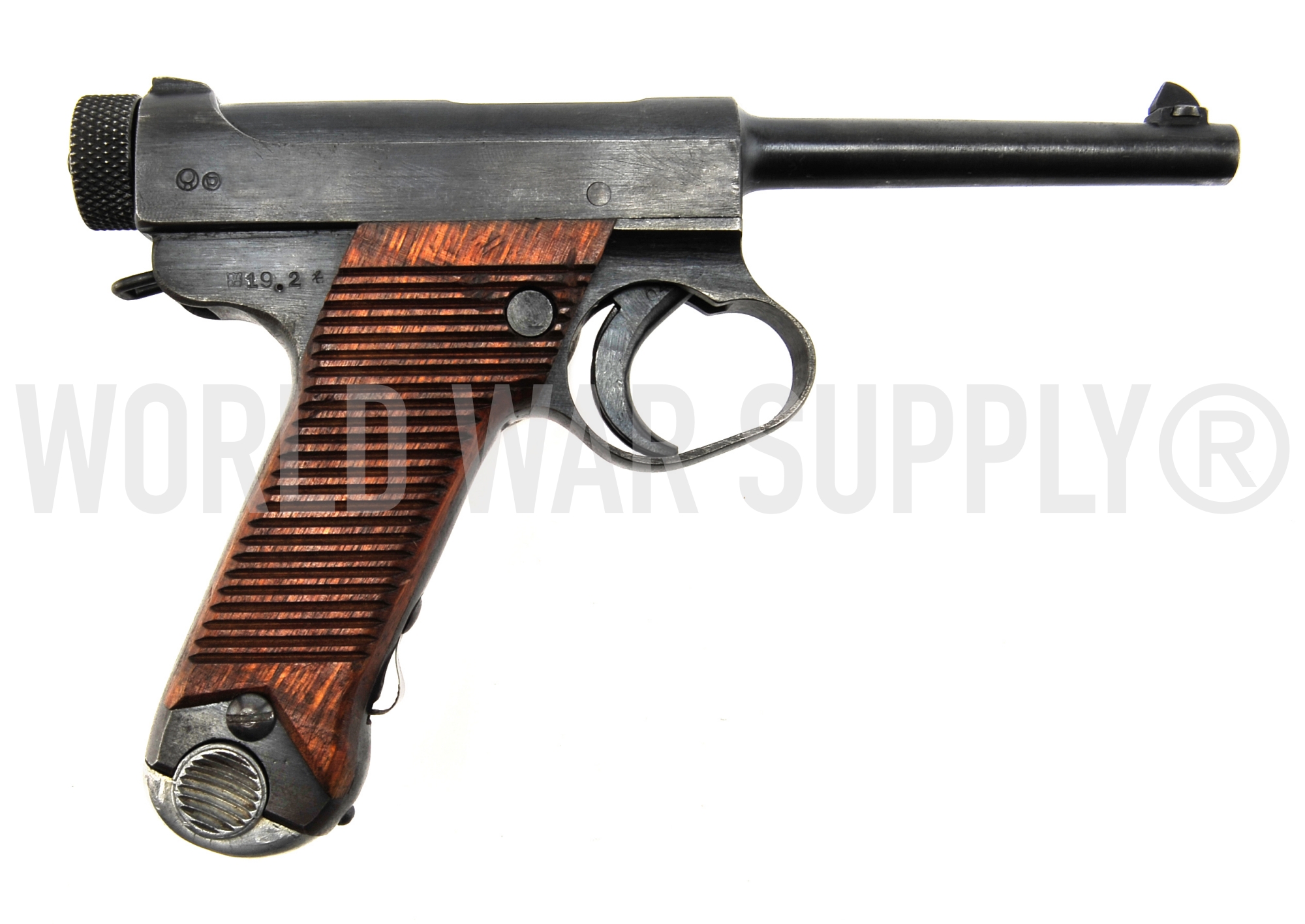 Posted at 15:44h in Firearm History by Jelena Petricevic

The island-hopping campaign was the pedestrian term for a most pitiless juggernaut. Allied forces bypassed Japanese outposts that posed no serious threat, leaving them to starve amidst a global hemoclysm that saw unprecedented human suffering. By contrast, the Allies fought ferociously for those island bases that possessed strategic resources, critical airfields, or appreciable offensive combat power.

Kurt Tucholsky wrote in 1925, “The war? I can’t find it so terrible! The death of one man: that is a catastrophe. One hundred thousand deaths: that is a statistic!”

Roughly 36 million people perished during the Pacific War. While that astronomical number just rolls inertly off the page, it was the suicidal death of less than thirty on a forgotten bypassed island 120km southeast of Tarawa that conjures a more remarkable poignance. This tiny Pacific island possessed a small airstrip, and that attribute alone warranted the attention of Allied war planners.

In the dark of night off the coast of this small nondescript island, a contingent of American Marines exited a surfaced submarine and made their way ashore in rubber boats. Intelligence indicated that a bedraggled platoon of half-starved Japanese soldiers remained on the island to defend the airstrip. This minuscule task force was led by a fanatical young Japanese Army Lieutenant.

The Marines established a patrol base and sent out a reconnaissance element the following day. The combat patrol returned having verified the location of the airfield and the disposition of its defenders. The few native inhabitants of the island seemed disinterested. Satisfied that they had the lay of the land, the Marine commander organized his unit. They would attack at first light.

Unbeknownst to the American Marines, the Japanese defenders were fully aware of both their location and intentions. Determined to launch a pre-emptive attack under cover of darkness, the Japanese Lieutenant commanding the small Infantry unit prepared his troops and stoked their passions with a spirited speech. In his enthusiasm, the young man swung his Type 14 Nambu pistol around vigorously, inadvertently stroking the trigger. The small weapon discharged, striking the hapless Japanese officer in the head and killing him instantly.

The Lieutenant’s men, distraught by the ignominious death of their leader, proceeded to dig their own graves and commit mass suicide. The local natives who had been privy to these events then approached the American Marines with enthusiasm. They then led the wary Americans to the airfield where they found the freshly dead Japanese defenders, killed to a man. Amidst a veritable ocean of blood, this small forgotten episode stands as a dark, quirky footnote to the depthless depravity of total war.

The Japanese Type 14 Nambu pistol was designed in 1925 as a simplified version of the more expensive Type A and Type B handguns. Where the Japanese arsenals produced some 10,300 of the earlier weapons, around 400,000 Type 14’s rolled off the lines before production ceased in 1945. A trim, elegant, and efficient design, the Type 14 served in all branches of the Japanese military throughout the Second World War.

The Type 14 was a recoil-operated semiautomatic handgun that featured a locked breech. The breach lock was mechanically similar to that of the Italian Glisenti Model 1910. Type 14 pistols were commonly issued to noncommissioned officers and were available for private purchase, per Japanese military custom, by members of the officer corps. 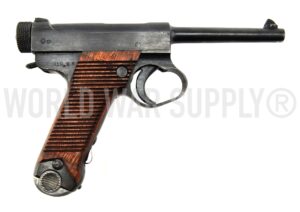 The Type 14 was a product of the fruitful mind of famed Japanese weapons designer LTG Kijiro Nambu. The original seeds for this handgun were planted in 1897 as part of the “30 Year Automatic Pistol Plan.” Considering the rudimentary state of the art in autoloading handgun design in the late 19th century, the Type 14 Nambu was indeed an exceptionally efficient weapon.

The bottlenecked 8x20mm Nambu cartridge was markedly underpowered in comparison to German 9x19mm Parabellum, Russian 7.62x25mm, and American .45ACP rounds. However, the Type 14 carried eight cartridges in its box magazine and remained fairly reliable even in fetid jungle settings. The magazine release was located on the left side of the gun under the right thumb, but the magazines did not drop freely. A dimpled aluminum magazine baseplate was provided to assist in extraction chores. 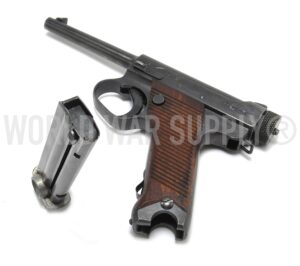 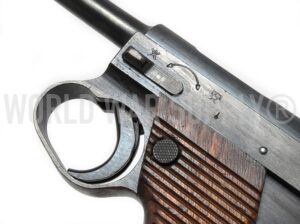 The safety on the Type 14 was a rotating lever on the left aspect of the frame. When set on safe the gun’s action was locked. The cocking knob on the back of the gun came in both slotted and knurled versions. Later versions included an enlarged trigger guard to better accommodate gloves for Japanese troops serving in Manchuria. The barrel and upper half of the gun were machined from a single solid block of steel.

Type 14 pistols were marked with the month and year of production based upon the reign of the Emperor. To the left of the stamped date on these pistols was found “Sho.” This is short for “Showa,” the name of the era coinciding with Hirohito’s reign. 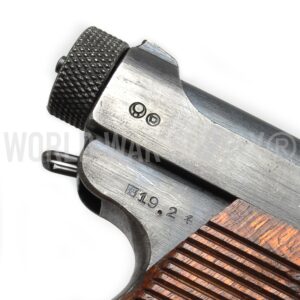 The Japanese did not date their weapons according to the Judeo-Christian Gregorian dating system accepted across the rest of the civilized world. They rather used the beginning of the Emperor’s reign as their starting point for establishing dates. As such, dates during the Meiji dynasty are offset by 1867 years, the Taisho dynasty by 1911 years, and the Showa dynasty by 1925 years. By subtracting these numbers from the accepted Gregorian year we may establish the designations used to describe Japanese wartime weapons. As this particular Nambu pistol was introduced in 1925 at the end of the Taisho era, subtracting 1911 from 1925 gives us the gun its Type 14 designation. 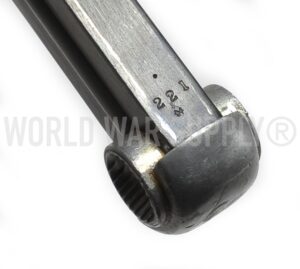 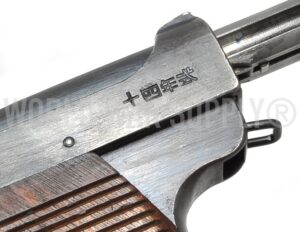 The Relentless Grinding Power of the B29 Superfortress

Early Type 14 pistols were issued with a distinctive leather clamshell holster. This carry rig effectively protected the gun from the harsh jungle elements, though it was not particularly amenable to rapid access. As the war ground on and both raw materials and production facilities were squeezed a rubberized canvas replacement was devised that was simpler, easier, and faster to produce.

The relentless waves of B29 bombers that pounded the Japanese industrial heartland inevitably took a toll on the Type 14’s production quality. Where early guns were meticulously crafted and beautifully finished, later versions showed rough machining marks, thin bluing, and a lack of final polishing on exposed surfaces. However, the Type 14 was a rugged and dependable design. Late-war guns remained fully functional and reliable despite these production shortcuts.

While the Type 14 was a generally dependable design, it did have its weaknesses. Shortages of raw materials, particularly toward the end of the war, made it difficult to retain proper levels of metallurgical quality. As a result, the firing pins on the Type 14 gained a reputation for brittleness and a tendency to break at inopportune moments. The clamshell holsters even included a space to carry a spare.

Japanese small arms during World War 2 reflected the disjoint philosophy that drove all of the Imperial military. Various services developed their own distinct weapons and, in so doing, wasted critical resources that could be much better spent on a centralized production program. Internecine competition between the services for everything from trucks to rifles to fighter aircraft became the stuff of nightmares for Japanese wartime logisticians pressed mightily by the exigencies of total war.

The Type 14 spawned a fascinating footnote to the modern pantheon of firearms. In 1945 Bill Ruger purchased a pair of Type 14 pistols from a US Marine returning from combat in the South Pacific. Ruger reverse-engineered the little gun in his garage and eventually produced the Ruger Standard, a basic rendition of LTG Nambu’s design chambered in .22LR. This early gun eventually evolved into the later Mark I, II, III, and IV .22 pistols that litter every gun shop in America today.

In the Type 14 Nambu pistol we see a solid design that rendered reliable service in all theaters of the Pacific War. Underpowered and sporting a few well-documented weaknesses, the Type 14 nonetheless soldiered on from the opening salvoes of the World War 2 all the way to the unconditional surrender of Japanese forces in 1945. Exemplified in the development and service of the Type 14 we can plot the trajectory of one of the modern world’s most remarkably doomed empires.

See Other Articles by Will Dabbs MD