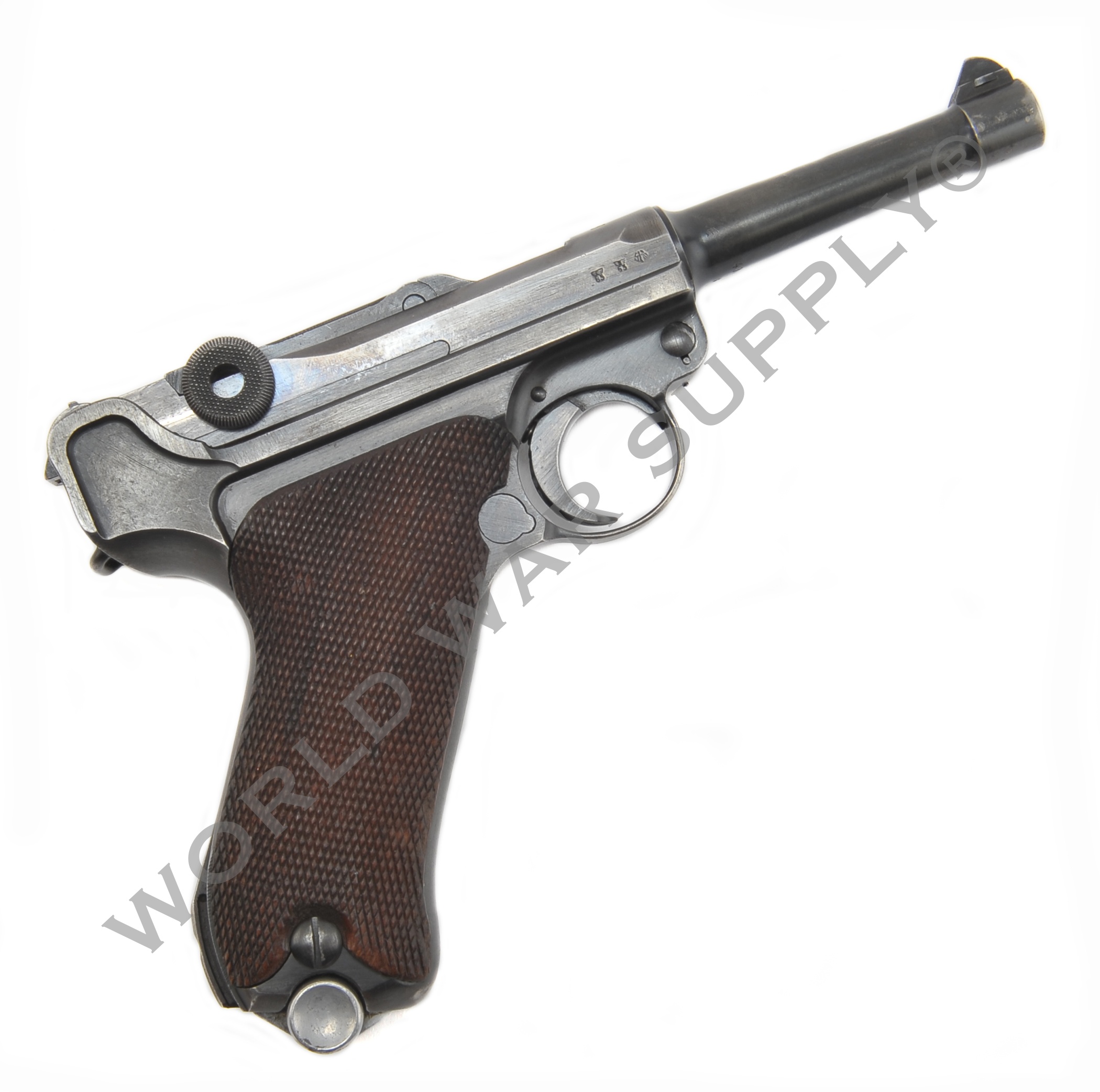 Posted at 13:53h in Firearm History by Jelena Petricevic

The funeral had been tough. Gramps had been sick for months so his death had not been unexpected, but it still stung when he passed. Memories of fishing together and building things in the workshop came flooding back. Retaining his composure throughout the service had been a real struggle for his grandson.

After the dust settled it was inevitably time to go through his stuff. The familiar musty smell of his grandfather’s clothes hanging in the closet brought everything back. Insignificant trinkets accumulated over a long life lived well combined to form a collective ghost image of the man in his now empty home. He had lived alone for three years after Grammy passed and had remained fiercely independent well into his nineties.

He never spoke of his time in Europe during World War 2, and Grammy had warned the grandkids not to ask. Like most men of his generation he had come home from so much pain, tragedy, and horror driven to build and create. The catharsis of hard work and family helped him cope. Along the way he built both a successful business and a robust extended clan.

The box was in the back of a closet shelf tucked behind a pile of neatly folded sweaters. It was heavy cardboard with metal reinforced corners in the manner of boxes crafted long ago. The outside had “SSG Martin Henderson” scrawled in faded pencil.

The man took the dusty box to the dining room table and adjusted the light. Like an archaeologist first cracking an ancient Egyptian tomb, he removed the lid and peered inside.

The medals were each left in their original presentation cases. He booted up his iPad so Google could tell him what each represented. Underneath the cracked blue cases he found the associated typed citations.

He recognized the Purple Heart. The Good Conduct Medal was obvious enough as was the decoration commemorating his wartime service in Europe. A separate blue pin-on emblem with a musket and a wreath he discovered was a Combat Infantryman’s Badge. The last box he opened contained the Silver Star.

His breath caught as he read the dry military prose. “For exceptional heroism…in the face of overwhelming odds…saved his entire company from annihilation…prevented the collapse of the battalion defense.” The man’s hands shook as he skimmed across the words.

At first it seemed incongruous that this softhearted man he had known so well had once been a war hero. The more he thought about it, however, it did seem entirely appropriate. His grandfather had always been a man of fierce loyalty, unshakable convictions, and unflinching virtue. Now he saw a different but consistent facet of his remarkable character.

Setting aside the sundry yellowed papers he came to an irregular item wrapped in cotton cloth. Lifting it gently from the bottom of the musty box he was surprised by its weight and irregular geometry. Swaddled within the oily wrapping he found a heavy military handgun snuggled within a worn leather holster. Carefully releasing the cracked leather strap he beheld the sinister yet seductive lines of a graceful German pistol.

The Luger was the alpha souvenir during the war in Europe. The details of the gun and how his grandfather had come to possess it tantalized the man in a way he had not expected. He now wished somehow to preserve and memorialize the man’s legacy for his own children.

The above vignette has been repeated countless times over the past few decades. As the Greatest Generation succumbs to age we frequently only now come to appreciate what treasures their stories represent. It behooves us to grasp every opportunity to preserve their priceless legacy for our children and their children.

The iconic P08 Parabellum Luger pistol was one of the most recognizable handguns ever made. Even people who don’t know guns know the Luger. The unique design of the weapon had some eclectic origins. 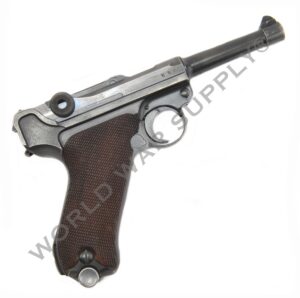 The P08 Parabellum was an evolutionary development of the C-93 Borchardt, a larger, more unwieldy weapon. The Construktion-93 Borchardt sported the familiar magazine within the grip as well as exquisite pre-war workmanship. However, the gun was also heavy, awkward, and inadequately reliable for hard field use. The most striking feature of both the Borchardt and the subsequent Luger was its toggle joint action. 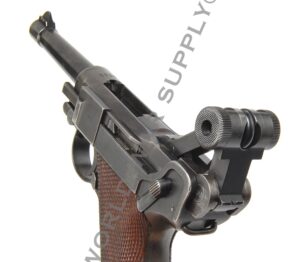 These two guns were recoil operated via a mechanism similar to the lock on a Maxim machinegun. The human knee originally inspired the basic apparatus. Upon firing the gun’s bolt recoiled backward as a unit along with the barrel. The toggle portion of the device then impinged upon a cam surface built into the frame. This cam pivoted the toggle upwards, unlocking the action for extraction and ejection of the empty case. A coil spring in the butt then forced the bolt back into battery to cycle the gun yet again.

To appreciate the gun’s anatomical origins simply stand with your knees locked. In this position your weight is borne by your skeleton with minimal muscular involvement. However, crack your knees forward and suddenly your weight falls onto your muscles. The Luger action functions according to this same principle. 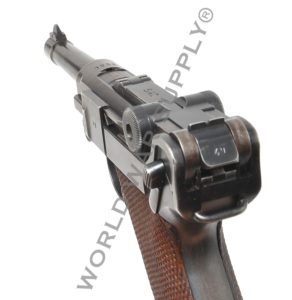 The unique action of the Luger can be best appreciated using nothing more than the gun and a tabletop. Make sure the pistol is unloaded and press the muzzle against a firm surface. Now watch how the toggle cycles in response to the cam built into the frame. To do so makes one appreciate the prescient brilliance of Herr Luger as well as the unrivalled engineer who originally crafted the human knee.

While the possession of a classic Luger pistol is a tangible connection to the extraordinary events that defined the Second World War, the addition of a few well-reasoned accessories will really bring the gun’s story to life. WorldWarSupply offers a variety of holsters and accessories for the Luger. Frequently the nature of the support equipment found with these remarkable artifacts can offer tantalizing insights into their origins and stories. As an example, all arms of the German military as well as Nazi police forces used the Luger during World War 2 albeit with different support gear.

Most remarkable among the WorldWarSupply pantheon, is their legendary reproduction German helmets. Intact originals can run thousands of dollars in collector’s circles. By contrast, these new-made examples are pressed from modern steel and then submitted to an artisan for weathering and aging. 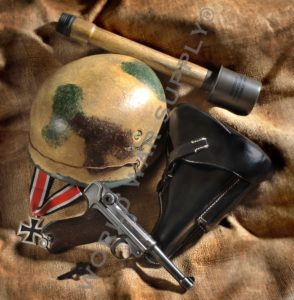 The end result looks like a battlefield pickup both inside and out. The leather liners are aged via a proprietary process, and the exteriors can be had in any number of configurations. These remarkable helmets are reasonably priced and look great on your mantle or desk at work. Such an artifact will inevitably spark some fascinating water cooler conversation.

Those incredible old heroes are all but gone now. After literally saving the planet and subsequently crafting the most powerful and successful nation in human history they left an indelible mark on both our great country and the world. While they may now be physically absent the reverence we show the artifacts they brought back stands in tribute to their fearlessness, selflessness, and heroism. Such stuff as this serves as a priceless connection to a most remarkable time.